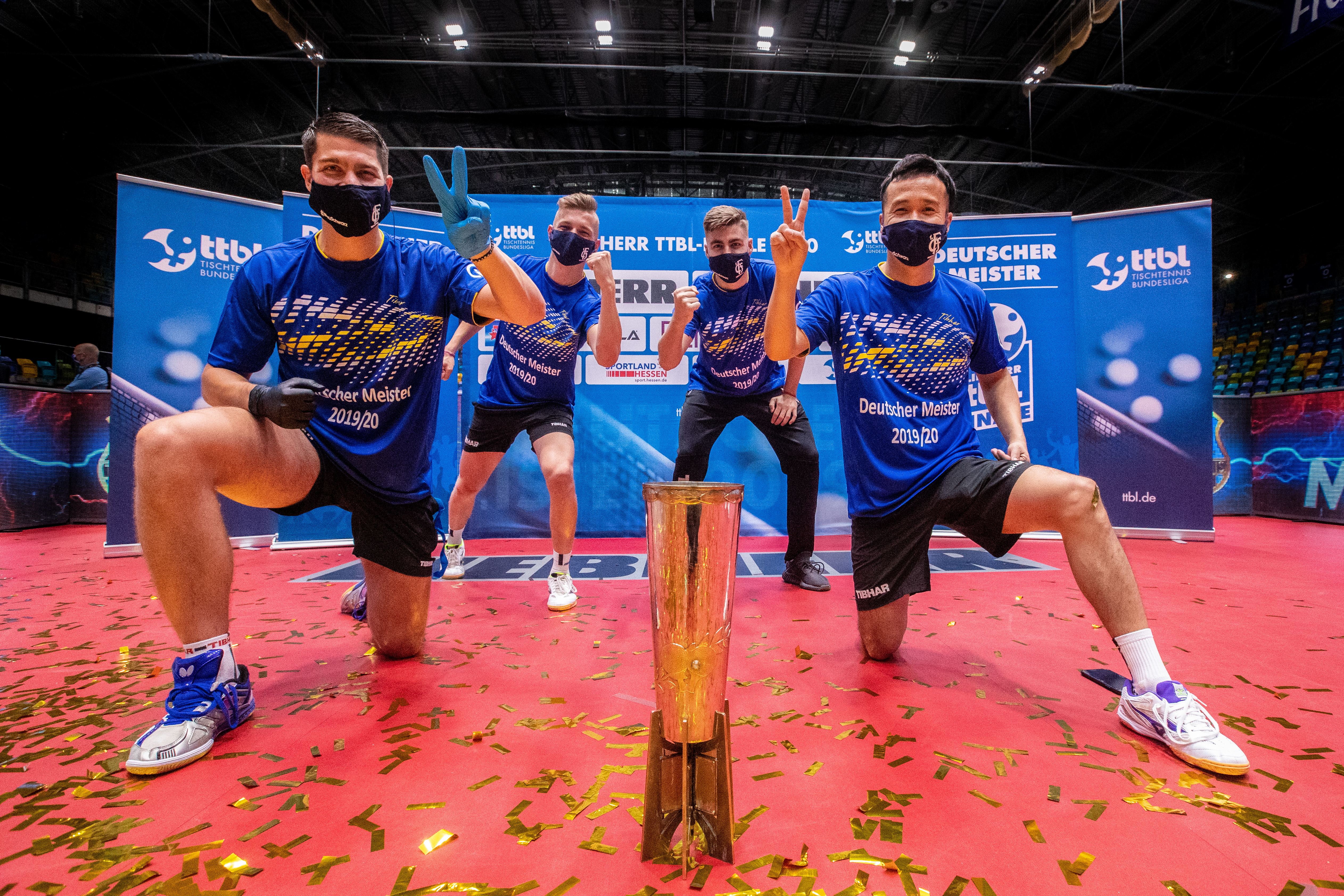 Third time is definitely a charm in the time of Covid-19 for 1. FC Saarbrücken TT as the team stormed their way through the finals of the LIEBHERR TTBL competition and clinched the coveted victory.

This completes the team’s trophy trail as they are also ETTU champs and the German Cup winners. Patrick FRANZISKA & SHANG Kun were the backbone that led the team to its success when they paved a good lead against Hugo CALDERANO and Simon GAUZY. The highlight was definitely on SHANG who played a second set against CALDERANO and saw to a solid finish for the team by a sweeping 3-0 win against the young Brazilian. 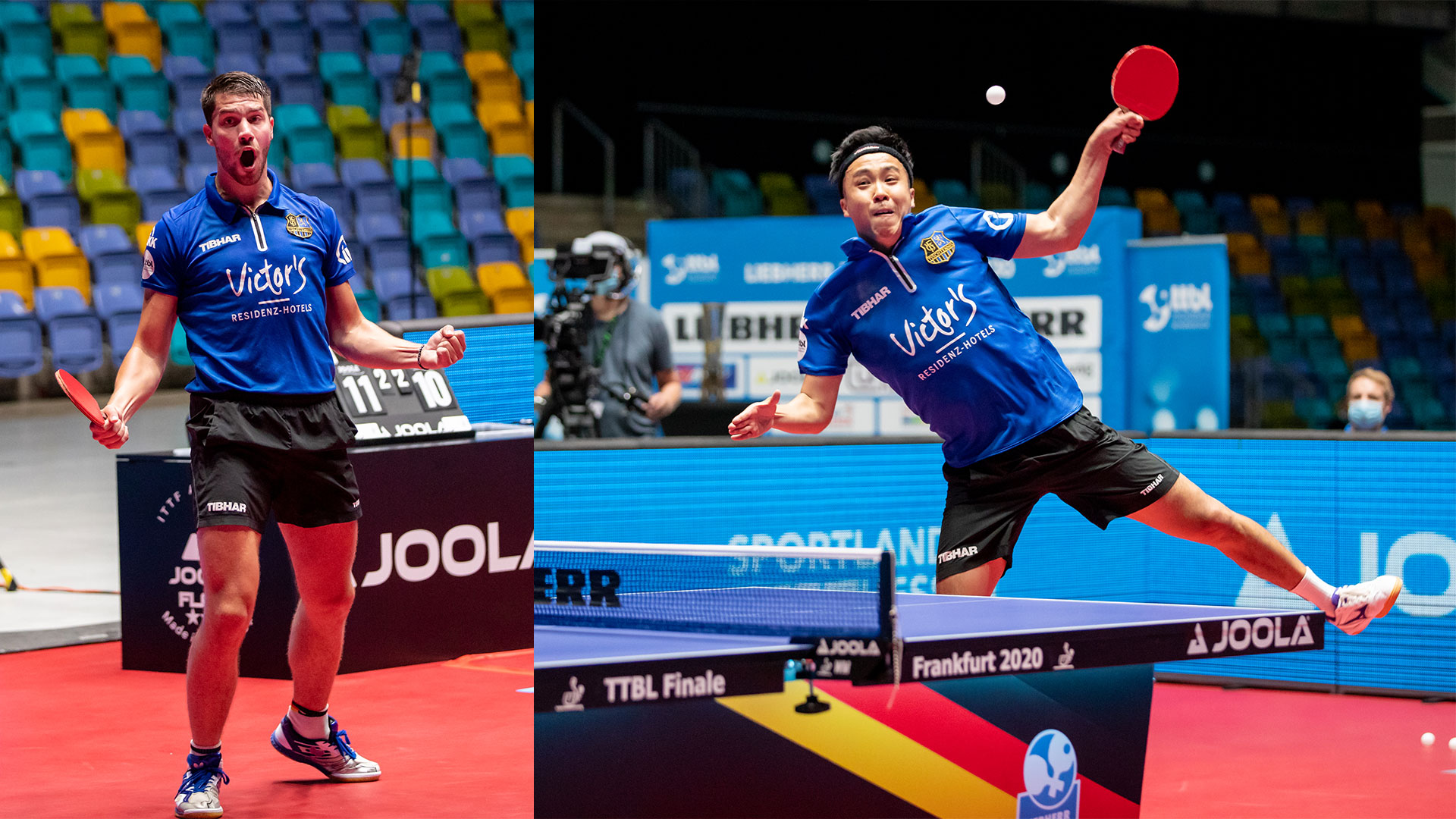 TIBHAR who is 1. FC Saarbrücken TT major sponsor and T2’s Official Rubber partner since 2017 is extremely glad with the performance of the team.

We’re proud that the team was able to rise above current times and win. It has not been easy but my company and the club made sure to participate in developing the best hygiene concepts in order to be able to return to the table. We called off the double’s event, disinfect all competition surfaces from tables to balls and of course, playing in a closed door arena.

He was also glad that the club insisted that the season ended “normally” when the sports industry was forced to halt due to the Covid-19 pandemic. Being the first sport to be played again following the lift of its lockdown measures, the victory feels even sweeter for both 1. FC Saarbrücken TT and TIBHAR.

It is exciting to see table tennis rising above the current pandemic and to watch fellow T2 alumni back in action; we reached out to the man of the hour, SHANG Kun who also played in the inaugural T2 Asia Pacific League, a pioneer in 2017 to get his reaction: 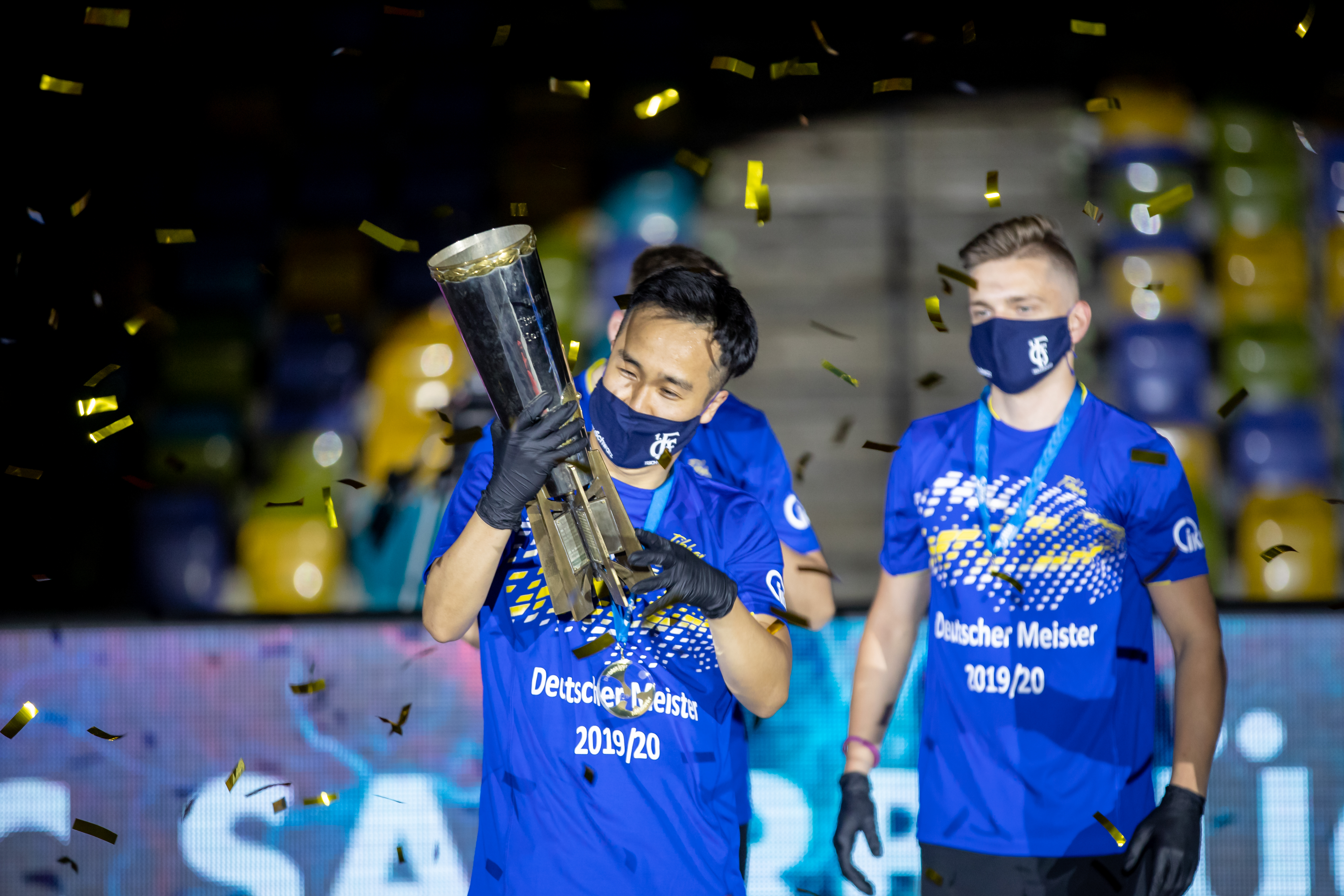 That was a magnificent display of table tennis from the team and congratulations lifting the title, how do you feel right now?

It feels amazing and I am indeed very happy that I’m able to stand alongside my teammates to lift our club’s very first league title in the Bundesliga. I want to thank everyone who has contributed to our success especially to the club’s investors’ and sponsors’ for their endless trust and support and without them, we will not be where we are today.

In your opinion was the biggest challenge going into the final stages of this competition?

I would say the biggest challenge is that pressure and desire to win the title because we have never won it before.

On top of that pressure to win, do you think emerging from the current health pandemic to compete has some sort of added pressure as well?

I guess in that sense, I am not as stressed because as athletes we are trained to focus and compete no matter what is the situation.

During the finals you met with both Simon Gauzy & Hugo Calderano at the table. Of the two, who was a tougher competitor?

I think they are both equally strong including Jakub Dyjas. No doubt, they have a very strong team and I had always enjoyed competing against them as the matches will always be exhilarating. 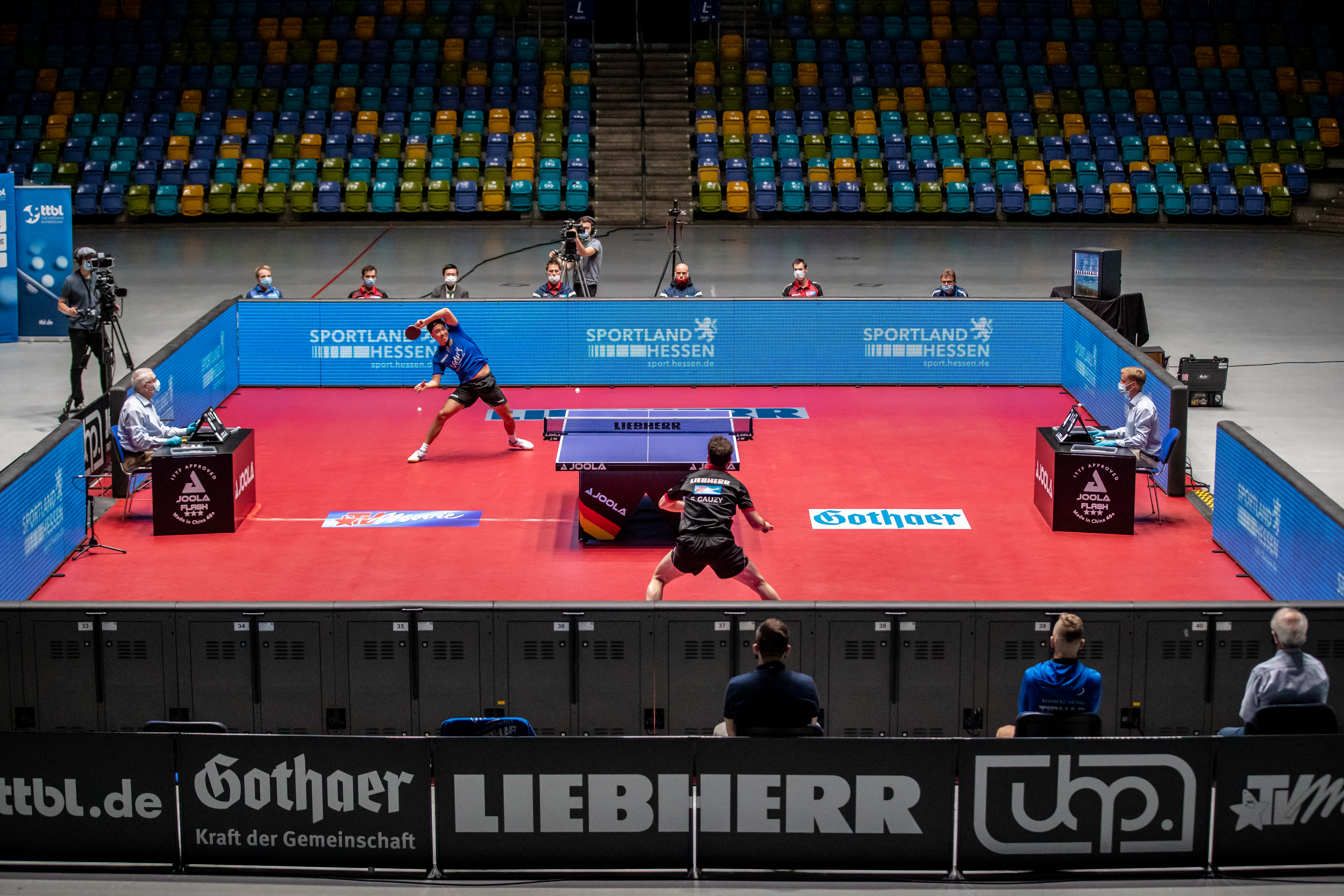 Did you find it hard to keep training when Germany initiated its lockdown back in March?

I was very focused and made sure to keep reminding myself that situations might be tough but let’s keep calm, know that nothing is over yet and that I need to be better than opponents, which I am aware are very strong and competitive.

You have been playing in the German circuit for some time now and what do you have to say about the difference as compared to competing back at home in China?

There is significant difference in the way the Europeans play plus it is a new culture around here for me, so I am still adapting to the newness and looking forward to really getting familiarised with the culture.

Now this is done and dusted, what’s next for you?

Well, I will continue to train daily and stay positive, stay healthy and remain competitive whilst we observe how the pandemic’s situation will evolve.

Shang Kun also took to his social media account to express gratitude towards the people who believed in him; invested, brought him to Germany to have another revival in his career.
We congratulate Shang Kun and 1. FC Saarbrücken TT on the victory yet again. 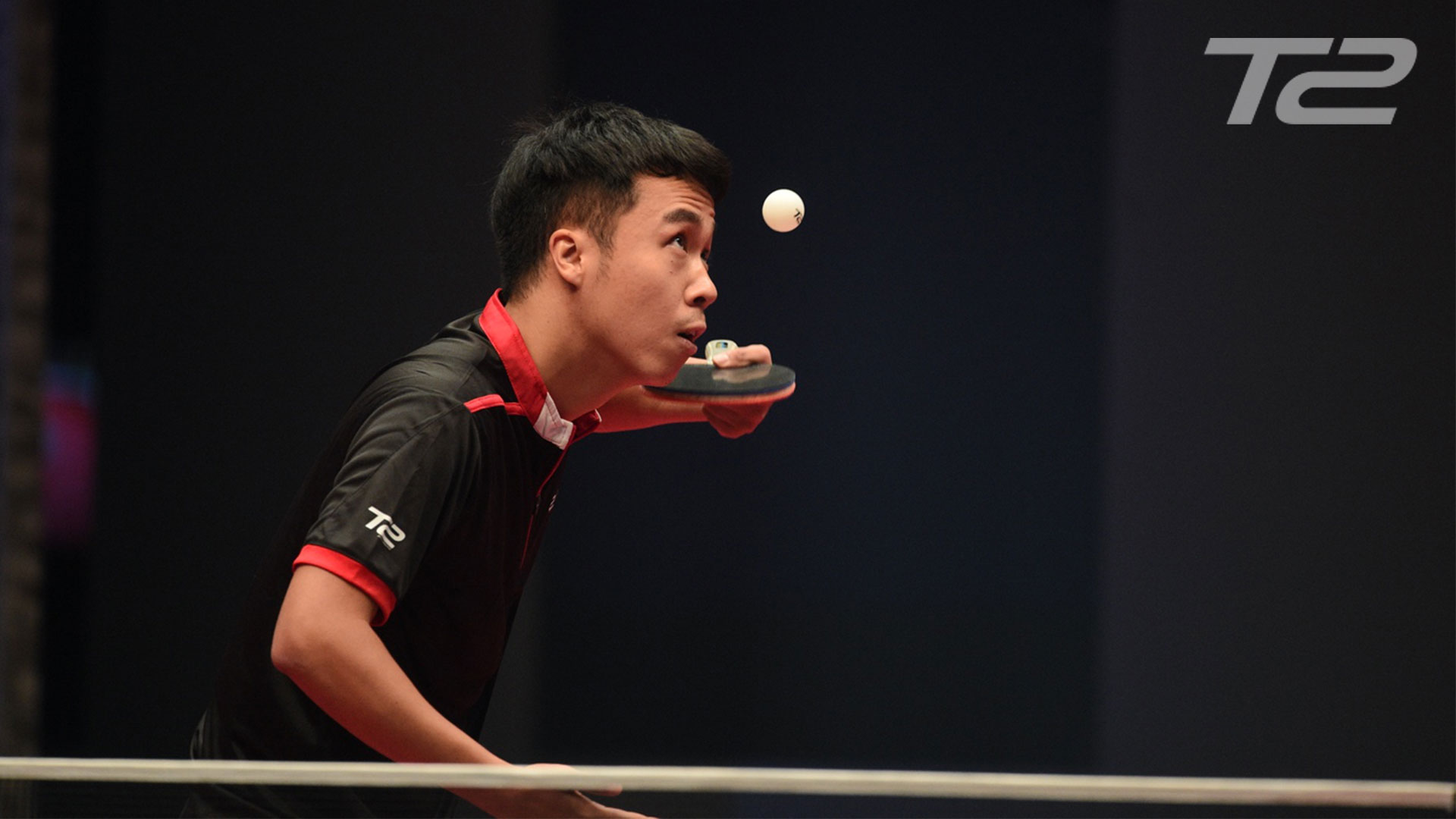 Shang Kun in action back in 2017, competing in the inaugural T2APAC tournament with Team Maze
Photo credit : T2APAC